From synwaywiki
Jump to: navigation, search

Does the analog voice board come with an audio jack for direct playback through a headset or sound speaker?

Yes. There is an audio jack which plays signals from Channel 0 through a connected headset or sound speaker.

What purpose does the external power supply on the analog board serve?

The purpose is to provide feed power for station modules. The feed power for 16-/8-channel B-type boards is 48V, for Version 2.0 of 16-/8-channel B-type boards is 40V, for 16-/8-channel C-type boards is 40V, and for 16-channel D-type boards is 12V. Each B-/C-type board has an external power interface which is used for connecting the external feed power and the ringing current power. For 16-channel D-type boards, multiple power supply schemes are available to provide the 12V feed power: one is to connect the P4 D-type hard disk power plug of the computer, and another is to short the S17 pin header and obtain the power via the PCIe slot (see the figure below). When the power supply inside the computer is insufficient, a 12V power adapter externally connected can work as a substitute. For more information, refer to the corresponding hardware manual on our website. 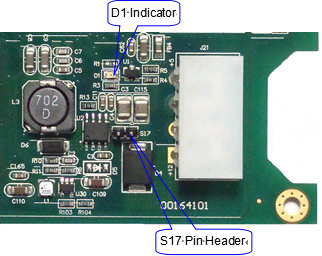 We strongly advise users to buy the power supply from Synway, and not to use any power supply with uncertain voltage or polarity, or it might cause damage to the voice board.

Note: Ensure that polarity is correct and only establish the connection with power off.

What is the difference between DTMF and FSK CallerIDs (calling-party numbers)?

Why could the trunk or recording channel on the analog board not receive CallerID?

1) Input connection to board is broken.

3) PBX side does not open incoming call display function to relative phone line.

4) PBX side did not send CallerID on this occasion.

5) Poor grounding may also cause a CallerID to be missed.

7) When in FSK mode, the application could have tried to retrieve CallerID when the driver has detected the first ring or even earlier. It is suggested that the application retrieves CallerID only after the second ring is detected.

A. Sensitivity for DTMF reception is too low. This can be adjusted in the configuration file.

C. CallerID is sent between the first and second rings but retrieved after detection of the send ring.

Why do two adjacent trunk modules sometimes receive the same CallerID at the same time?

It is mostly due to permanent or transient short-circuiting between the two modules.

Why does a channel repeatedly receive the same CallerID?

The driver does not automatically clear the CallerID buffer. It is suggested that the application program is set to clear the buffer upon the retrieval of each CallerID, or the previous CallerID will be read.

Why does the record or trunk channel receive gibberish when trying to retrieve CallerID?

This is often due to poor line quality or poor grounding.

Why do the trunk channels sometimes appear engaged, without response, or crossed lines between two adjacent channels (i.e. both lines appear to have received a call when in fact only one has)?

1) Possible reasons for line-engagement or no-response on certain channels:

A. RJ11 jack might not be properly plugged in.

B. Outgoing phone line might have been short-circuited or faulty.

C. Modules might be loose, which resulted in bad connection

2) Line-crossing is usually a result of the 4 pins of the input RJ11 jack touching one another, thereby creating short-circuit among them.

How to properly configure tone analysis parameters for an analog board?

Tone is a rhythmic audio signal usually used for indicating line status, such as calling/called party's hang-up, line-engagement, etc. A standard tone is often a single-sine wave signal of 450Hz. However, certain smaller PBXs or key telephone systems might use other frequencies or even dual-tones. The Synway driver platform endows each channel with 2 independent tone-detectors, allowing them to analyze 2 different tones at one time.

2) Correctly set characteristics of the wave form of the tone.

This is a continuous tone. Set the shortest continuous time duration for the tone, which is generally above 1.5.seconds.

The periodic duty ratio is 1:1 (i.e. equal duration for tone and silence). Set busy tone period and busy tone count threshold (to prevent misjudgment, the driver concludes that the tone is indeed a busy tone only when the successive ring count exceeds the threshold parameter).

The periodic duty ratio is 1:4 (i.e. tone-to-silence ratio is 1:4). Set the continuous time duration for the tone (high LEV) and for silence (low LEV).

Misjudgment of tones is usually due to incorrect configuration of the above parameters. Analyze the tones using ShTA.exe under the driver installation directory (Refer to ShTA_UserManual.chm under the same directory). If this tool failed to analyze the tones, record the unknown tones, analyze their characteristics such as frequency and wave form with editing tools like Cooledit, then enter the correct parameters into the configuration file accordingly. Thus the system can judge the tone accurately.

Why does the analog trunk channel sometimes undesirably pick up busy tones?

Normal voice, when under the influence of poor lines and poor grounding might generate noise. Illusive busy tones that resemble the characteristics of a genuine busy tone can sometimes be found among these noises. The consequent effect can be minimized by increasing busy tone’s count threshold to filter out the illusive busy tones.

Why does the application fail to invoke the function SsmAutoDial to dial a number from the trunk channel?

The function SsmAutoDial only performs dial operation upon correct detection of dial tones on the analog trunk channel. Hence, the absence of dial tones, or failure to detect dial tones will result in the function call to be unsuccessful.

How does an analog trunk channel detect pickup from remote phone in a dial-up process?

Why does the analog trunk channel sometimes fail to detect hangup from remote end?

There might be two reasons for failure to detect remote hangup.

1) Fails to detect busy tones on the line. Refer to Question 7 “How to properly configure tone analysis parameters for an analog board?” in this chapter for busy-tone settings.

2) PBX has not sent busy tones.

How does the analog trunk module detect connection drop on a line?

To detect whether the connection on a line is normal or not, the analog trunk channel can invoke the function SsmGetLineVoltage and examine the voltage obtained by. If the line is ok, the voltage will be normal too.

Is it possible for driver to make a misjudgment when PBX plays prompt tones in a call from the analog trunk channel to a mobile phone?

Yes, the driver may misconclude that the analog trunk channel is in a ‘connected’ state.

Why does an analog trunk channel switch from "idle" to "ringing" only after two rings have been detected?

This has been set so in the item ‘AlwaysToRingingOnRingCntX’ of the configuration file ‘Shconfig.ini’, and can be modified for the same action to happen after one ring or multiple rings.

Why does an analog trunk channel take a longer time to determine a ringback tone when calling out?

A trunk channel will not return ‘ringback’ values before a full-cadence ringback tone is detected. i.e. it will determine a ringback tone only after the first ring from remote end has ended or the second ring starts.

When a remote phone places a call to an analog trunk channel, the phone cannot hear anything played by the channel, or hears only a short section before it is cut off. Why?

This happens if the trunk channel is set to stop playback upon detection of barge-in and the caller interrupts playback by talking. The option can be turned off.

What to do if a station on analog boards can hear echoes from itself?

Echoes are cancelled at the end they are produced. Therefore, for echoes produced at the end of analog boards, you can cancel them by changing the board model to SHT-16C-CT/PCI/EC or SHT-8C/PCI/EC which supports echo cancellation in hardware.

This can be done through an application to the telecoms office.

What is the maximum length of a station phone line from the station module on an analog board?

It should not exceed 4.8km.

Which phenomenon indicates the damage of the station module?

Can the external power supply for B-type boards be used for C-type boards, and vice versa?

When a station phone makes a call from a station module via an analog trunk channel, the volume heard at the remote phone sounds rather low. Why?

We suggest invoking the function SsmTalkWithEx to increase the volume for the station or analog trunk channel to a proper level.

With the station phone being hung up, sound played by the station channel reaches other channels as echo from the phone, which is why other conference channels can hear the played sound.

Why does a station phone hear howling when it makes a call from a station module connected through a trunk module?

When a station module is directly bussed with a trunk module, and the station phone is off-hook while the trunk module remains on-hook, dissimilarity of impedance levels will cause howling to happen in a call. This can be resolved by invoking a function to link the station channel with the trunk channel over bus, while both are off-hook.

Why is there much noise when the station phone connected to an on-board station module is off-hook?

This usually occurs with poor contact, bad lines, improper grounding or even interference from the power supply.